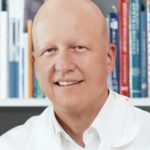 Prof. Becker received his basic training as an ophthalmologist (1994-2001) at the University Eye Clinic in Heidelberg, Germany and completed his surgical training for anterior and posterior segment surgery (2001-2008). He is specialized in uveitis. Since 2008 he has been working at Stadtspital in Zurich and became head of the department in 2009. He is co-founder of Ophthorobotics, developing an assisted system for intravitreal injections.